Pakistan automobile industry is witnessing some rapid developments in recent times. Earlier this month, KIA vehicles started to appear testing on our roads soon followed by Hyundai. A FAW R7 SUV was caught testing in Karachi, Renault announced its venture with Al-Futtaim to assemble & sell Renault branded vehicles in Pakistan while Sazgar Engineering, famous for manufacturing the 3-wheel CNG Rickshaw have inked their collaboration with a Chinese automobile manufacturer, the name of which has been kept under covers.

Now United Auto Industries, which is the company behind the second largest motorcycle brand in Pakistan, the “United Motorcycles”, is now venturing into automobile business and is currently hunting for dealers for their nationwide operations. 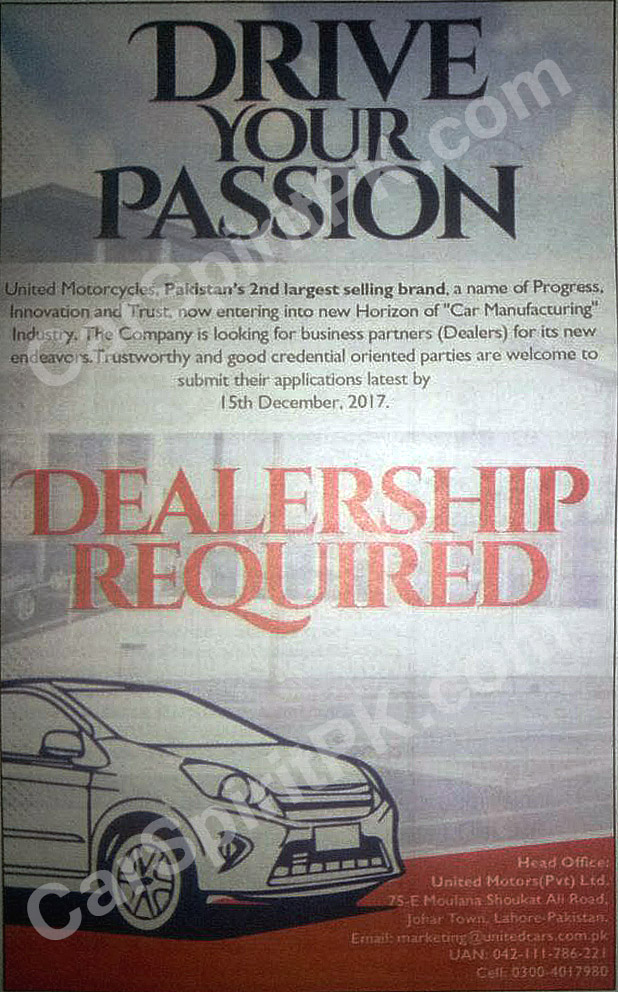 Earlier in June 2017, The Ministry of Industry and Production allowed United Autos, along with Kia-Lucky Motors Pakistan Limited and Nishat Group to set up units for assembly and manufacturing of vehicles under the Greenfield investment category.

According to information United has also teamed up with a Chinese brand, the name of which has not been disclosed yet. With all these companies getting into the car manufacturing business we are sure to witness some serious competition in automobile sector in coming years. Stay tuned to CarSpiritPK for more information on United Autos’ car manufacturing venture.