A few years ago Volvo, a Swedish carmaker, was heading the same way as its now-defunct competitor, Saab. Its sales had fallen sharply during the global recession and the company was making serious losses. Its owner, Ford, in the midst of its own financial problems, was forced to sell it in 2010. It was not obvious that the new owner, Zhejiang Geely Holdings of China, would be able to restore Volvo’s fortunes. Now Geely is betting Volvo’s future, and its own hopes of breaking into Western markets, on an $11 billion investment to build a range of new cars.

Geely’s acquisition of Volvo from Ford in 2010 has helped Geely quickly gain decades of R&D expertise from Volvo. Meanwhile, the tie-up has enabled the Swedish automaker to sell more vehicles in China than anywhere else and will result in a common platform for Volvo and Geely compacts. Volvo’s Ex Vice President of Design, Peter Horbury is currently heading Geely’s design department as Senior Vice-President & his influence is obvious since Geely has been producing some stunning vehicles lately. 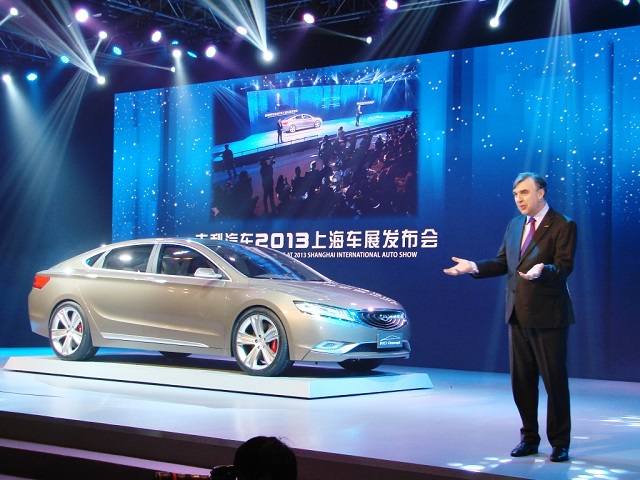 The GC9 was named as the ‘China Car of the Year 2016’, the first time for a Chinese domestic brand to win this award. The recently launched Emgrand GS & GL are equally impressive and more importantly doesn’t look like a pirated design any more, thanks to Peter Horbury.

Geely Emgrand GS which is a good looking crossover had its public debut at the Beijing Auto Show earlier this year and was launched on the Chinese car market at the same time. It is priced from 77,800 yuan (PKR 12.14 lac) up to 108,800 yuan (PKR 16.9 lac).

There are two versions; the GS Sport and the GS. They differ at the front and rear bumpers, and there are smaller differences in the outer rim of the grille, darkened headlights on the GS Sport, while the GS Sport also comes with perforated metal pedals whereas the standard GS has basic rubber ones.

The Emgrand GL sedan has been officially revealed but will be launched by September with an expected price tag starting from 90,000 yuan (PKR 14 lac) up to 120,000 yuan (PKR 18.73 lac). Both GS crossover and GL sedan are equipped with same engines: a 1.3 turbo with 130hp and 185nm and a 1.8 liter naturally aspirated unit with 133hp and 170nm. The 1.3 turbo is mated to a six-speed DCT, while the 1.8 comes with the same six-speed DCT or a six-speed manual transmission.

The interior is also quite same with good quality materials and leather seats. Both the cars have a sporty flat-bottomed steering wheel, a center color screen, beautiful meter display and nice gear console. The engine bay is also very neatly covered while the fluid reservoirs can still be accessed quite easily.

Overall the Geely Emgrand range is shaping up into quite a competitive lineup with impressive designs and better built quality. Geely with their recent range of cars are showing themselves as a serious contender in the modern age of automobiles development.

During the previous decade, a private company SUS motors in Pakistan imported the Geely CK sedan, which was famous for its Mercedes inspired looks and some hopeless crash test videos on youtube. Although the car carried a Toyota 2E engine under the hood, the somewhat lousy built quality and lack of proper after sales support never made the car a real hit in the market.

After the new auto policy 2016-21 was announced, many European & Chinese companies have shown interest in exploring the Pakistani market but we are yet to hear any news from Geely in this regard. With the kind of vehicles Geely is producing today, one could only wish if Geely, just like Al-Haj FAW, had a proper representation in our country.