According to the official Facebook page of Honda Pakistan, the 2022 Civic sedan can be booked against PKR 1.2 million. Honda has also revealed the tentative prices of new Civic variants, according to which the base variant will be priced at PKR 50.99 lac, the Oriel will be PKR 53.99 lac whereas the flagship RS variant will cost PKR 61.49 lac. All variants will be powered by 1.5L turbo engine. 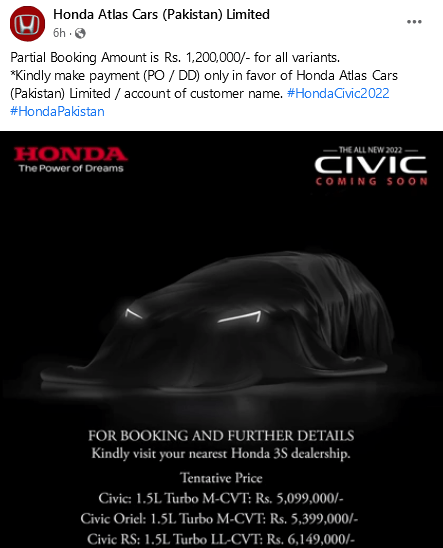 With this, Honda Pakistan continues on with its known practice of initiating bookings without revealing the vehicle or its specs. The company successfully did this with the launch of 10th gen Civic in 2016, BR-V in 2017 and recently with the 6th gen City launch in 2021.

Looking at the sort of craze people have for Honda cars in Pakistan, the company will be able to garner healthy bookings this time again. However at the same time, genuine customers fear that most units will be booked by profiteers who intend to resell the units at a higher price commonly referred to as own/ on money/ premium.

Honda will formally unveil the all-new Civic in forthcoming months with deliveries set to commence towards the middle of this year. Stay tuned to CarSpiritPK for more information on 11th gen Honda Civic launch in Pakistan.