All New Kia Sportage Debuts in the US

After making its world premiere earlier this year, followed by unveiling of European-spec versions, the 5th generation Kia Sportage has finally made its North American debut. The vehicle will go on sale from the first quarter of 2022 with final prices yet to be announced.

The US-spec Kia Sportage is similar to the international variants having a longer wheelbase unlike the European version which gets a shorter wheelbase. As far as the dimensions are concerned, the new Sportage measures 4,660 mm long, 1,865 mm wide and 1,660 mm tall with a wheelbase of 2,755 mm. According to Kia, these proportions along with the improved packaging brought by the new platform give the compact crossover, a segment-leading headroom, legroom, and an impressive 637 liters of cargo volume. Inside, the 5th gen Sportage features a curved dual-screen dashboard, with a 12.3-inch digital instrument cluster and a 12.3-inch infotainment display at the center of dashboard. Android Auto and Apple CarPlay are standard along with the latest generation of Kia’s onboard software. Plus drivers and passengers also benefits from Wi-Fi hotspot capability, optional wireless phone charging, and Amazon Alexa and Google Assistant integration. 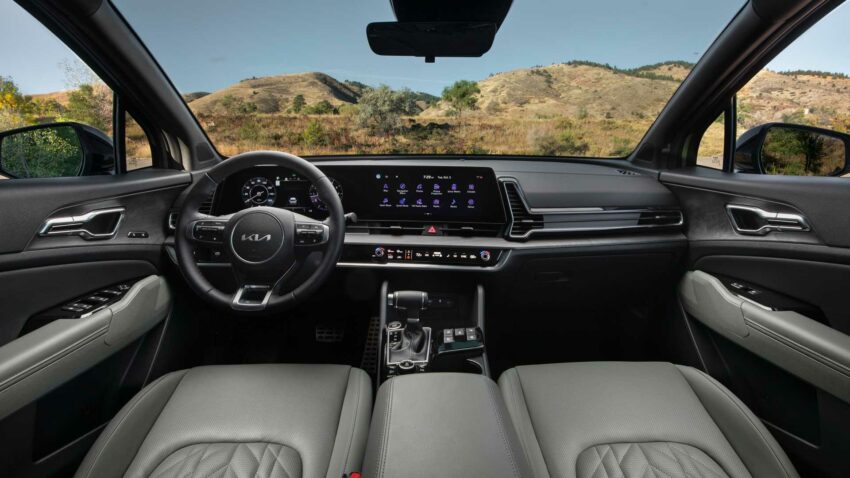 Kia is yet to reveal powertrain details about the new US-spec Sportage, however according to the preliminary data there will be a new 2.5L four-cylinder engine with an estimated 187hp of power and 241Nm of torque and will come paired to an 8-speed automatic gearbox. The 5th gen Kia Sportage will come standard with front-wheel drive or optional all-wheel drive. A hybrid version will also be introduced later on but Kia hasn’t given details about it either.