Ghandhara Nissan Limited (GNL) has revealed the timeline to launch Chery vehicles in Pakistan. According to a letter sent to Pakistan Stock Exchange, the company says it plans to launch Chery SUVs during the current financial year, which means the formal launch will likely take place before June 2022. The notification reads:

“The company is currently engaged in pre-launch tasks of the project including establishment of dealership network, modernization and up-gradation of plant infrastructure, marketing and supply chain activities.”

According to GNL, it would update the stakeholders regarding exact launch time in near future. A Chery official while speaking to CarSpiritPK has revealed that the company might unveil the upcoming Chery vehicles in a media event expected to take place in the month of December. Tiggo-8 and Tiggo-4 are the two crossovers that GNL will initially be introducing in Pakistan. However towards the later stages, sedans and other vehicles might also be considered for our market, the official said. 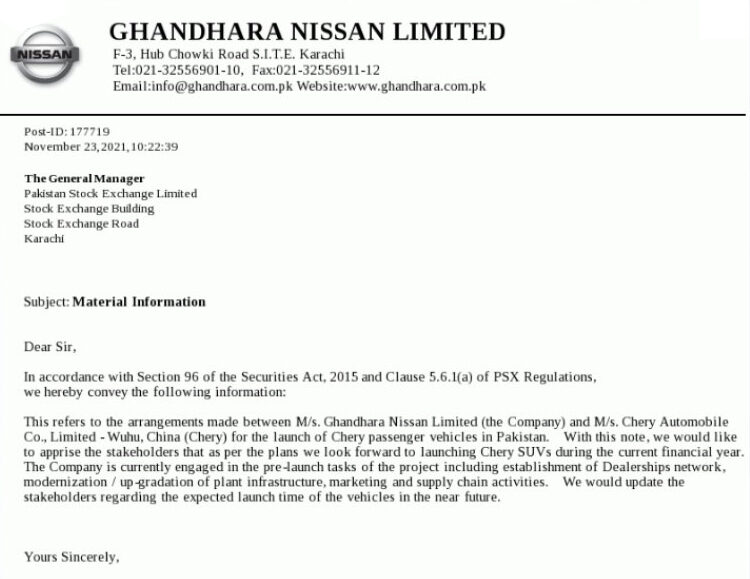 The introduction of crossovers & SUVs has become a new craze for newcomers as the majority of automakers are willing to tap this segment which was untouched by the existing players for a long time.

GNL and Chery inked a deal earlier this year to invest Rs 2.4 billion in Pakistan to manufacture & assemble a range of automobiles. Furthermore, in line with the new Electric Vehicle Policy, the company also plans to introduce its range of electric vehicles in the forthcoming years.