This will be the first example of a Chinese-made EV making a large-scale landing in Japan. According to the agreement, Guangxi Auto will be responsible for developing and manufacturing the EVs while ASF will shoulder the research and development expenses and sell these vehicles in Japan. Sagawa, a major transport company, will use the EVs to deliver goods mostly over short distances.

The EV van will have a cruising range of more than 200 km. According to information, specifications will be finalized in August, while the Chinese automaker will start mass production as early as in September, with deliveries expected to commence towards the end of 2022. The first batch of the vehicles is valued at 210 million yuan ($33 million), and the two sides expect accumulated sales to reach 100,000 units by 2030, the agreement said.

The Chinese automaker sees the small commercial EV segment, which has been mostly overlooked by Japanese auto makers, as a foothold for further market expansion. During the agreement signing ceremony, Yuan Zhijun, the General Manager of Guangxi Auto said:

“In the next 10 to 15 years, some gasoline and diesel vehicles will start to phase out and rapid development has been seen in the new energy vehicle (NEV) industry. China is taking the lead globally in NEV development. This cooperation is expected to help Guangxi Auto accelerate tapping the Japanese market for microtype NEVs for logistics distribution. The cooperation also marks the first time for Guangxi’s vehicles to enter the market of Japan－a global automobile power－marking a milestone for the region’s automobile industry.”

Atsushi Tamura, Chief Operating Officer of ASF, said conducting economic exchanges with Guangxi can help Japanese enterprises to better tap the business opportunities in Southeast Asian markets, thanks to the geographical advantages of the autonomous region. 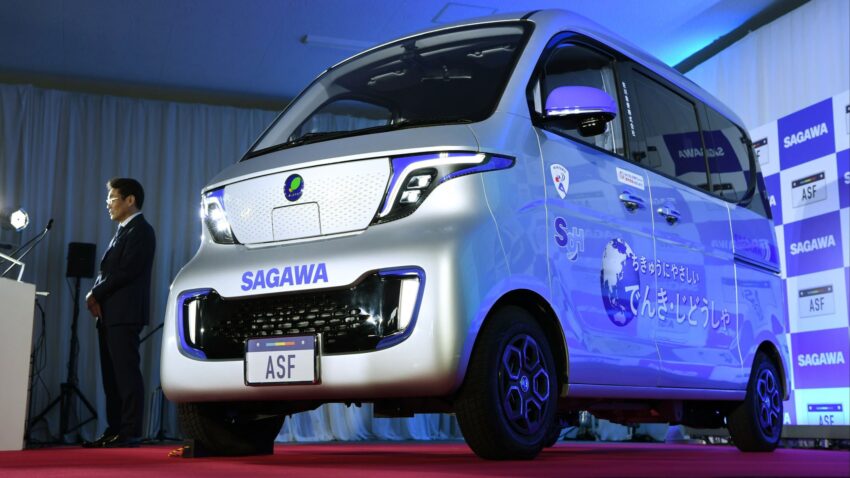 Small commercial EVs is an area in which Japanese manufacturers have not made much effort in terms of ensuring profitability, safety and maintaining brand. Mitsubishi had released the world’s first commercial EV minivan, the MINICAB-MiEV, in 2011, but the cumulative sales are only 9,100 units.

Meanwhile, Chinese EVs have begun to penetrate into the Japanese commercial car market. BYD, a major Chinese producer, is increasing the number of deliveries in Japan. Tokyo’s Ueno Zoo and Japan’s Dutch-themed amusement park Huis Ten Bosch have adopted it as an in-park bus, with a total of 53 buses. BYD aims to increase the number to 100 by June next year.