All You Need to Know About the 2017 Toyota Corolla Facelift

Indus Motor Company (IMC) is all set to launch the 11th generation Toyota Corolla facelift in Pakistan. Apart from the visual differences, the new Corolla will offer quite a few upgrades which are discussed in detail below.

So far IMC has revealed the top-of-the-line Altis Grande variant which gets the most number of improvements, the other versions will obviously get less of the features mentioned below, and information regarding the lower-end versions will be updated as and when received.

The new bold refreshed front visage amplifies the Corolla’s aggressive look while the elongated, swept-back headlamp clusters are adorned with LED daytime running lights. The re-sculpted bumper features a larger air dam imparting a wider stance to its front profile. The rear-end is largely similar to the existing model with the exception of the slightly restyled LED tail lamp clusters and a redesigned slim chrome garnish that further emphasizes the Corolla’s width and stance.

The most important visual upgrade in the facelift is obviously the front fascia, which redefines the personality of the new Corolla. The LED Projection headlamps are adorned with DRLs and the Bi-Beam system that allows a single headlamp to generate both high and low beam.

The Smart entry system allows you to unlock the doors by simply gripping the door handle while the key is in the range. The same goes for the trunk as well which can be opened with a touch of a button.

Related: Record Sales for Honda Civic In A Single Year

The outside rear view mirrors with auto-reverse link mode, will automatically angle downwards when the vehicle is in reverse gear mode, in order to give a better view of the ground. Other standard visual upgrades include side skirts, colored mud flaps, front fog lamps and 16” Alloy Rims which comes with Yokohama Advan 205/55 R16 tires. 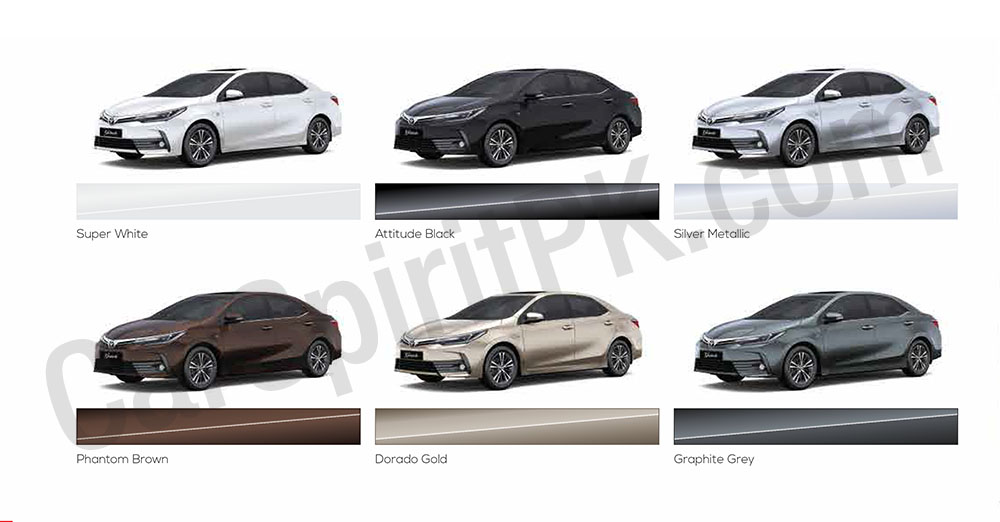 The Altis Grande will be available in 6 colors with bulk load of customization options available via Toyota Genuine Accessories.

The interior also receives minor updates but the overall design and appearance looks unchanged. The instrument panel has been updated with a redesigned climate control panel with toggle-type switches and circular air vents.

Having personally examined the vehicle, overall I found the built quality and interior fit & finish of the facelift notably better than that of 2014. The leather seats are comfy and rear reclining seats with soft foamed seat corners provide maximum comfort for the rear passengers.

The improved Optitron meter is equipped with 4.2 inch TFT color Multi Information Display which provides information including driving range, fuel consumption and Eco-monitor. The Altis Grande will give an unparalleled multimedia experience as it comes equipped with front & rear camera in addition to a 9” display with a built-in webcam, navigation, Wifi with Hotspot all powered by an Android operating system. 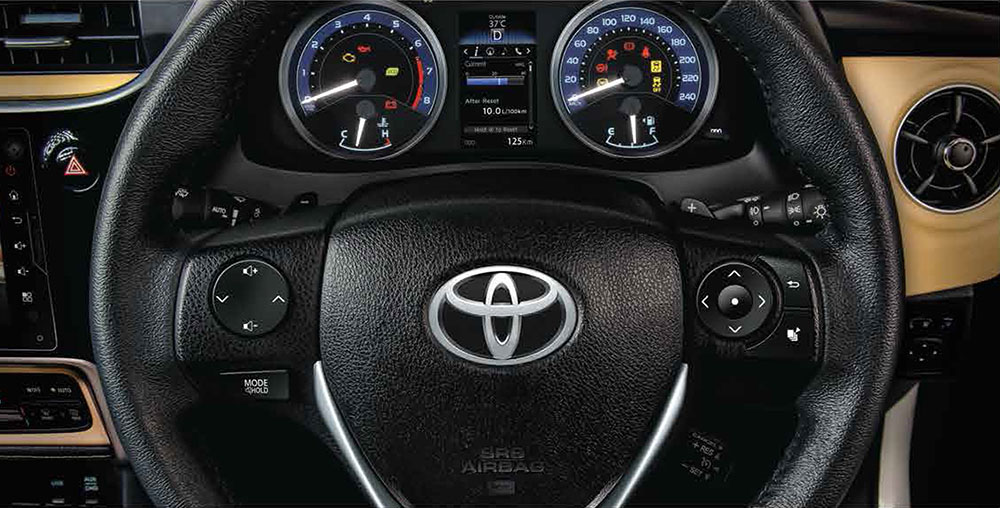 The Toyota Connect mobile App is also available which elevates the connected technology and provides users with a greater level of convenience including Trip Analysis, GPS-enabled vehicle locator and vehicle alert notifications etc.

Related: Is Ciaz Turning Out To Be Another Pak Suzuki Flop?

The Altis Grande comes equipped with ABS (Anti-lock Braking System) and EBD (Electronic Brake-force Distribution) and BA (Brake Assist), in addition to VSC (Vehicle Stability Control) which helps the driver to control skidding when swerving suddenly or turning on slippery road surfaces, and TRC (Traction Control) which aids to maintain the drive power and prevents the wheels from spinning when starting the vehicle or accelerating on slippery roads.

The Price of the New Corolla facelift will start from PKR 17.83 lac for the base 1.3 liter Xli version and will go up to PKR 25.73 lac for the top-of-the-line 1.8 liter Altis Grande CVTi. Refer to the price list below. 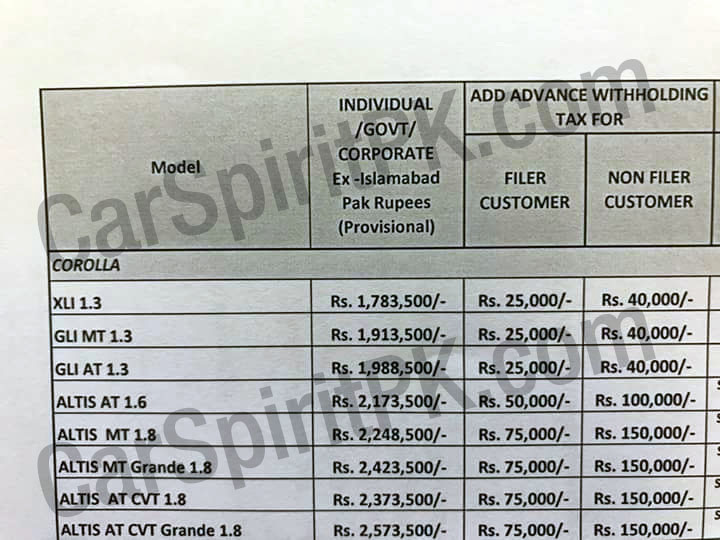 The formal launch of the vehicle is expected in coming weeks, stay tuned to CarSpiritPK for more updates on the 2017 Toyota Corolla facelift launch. 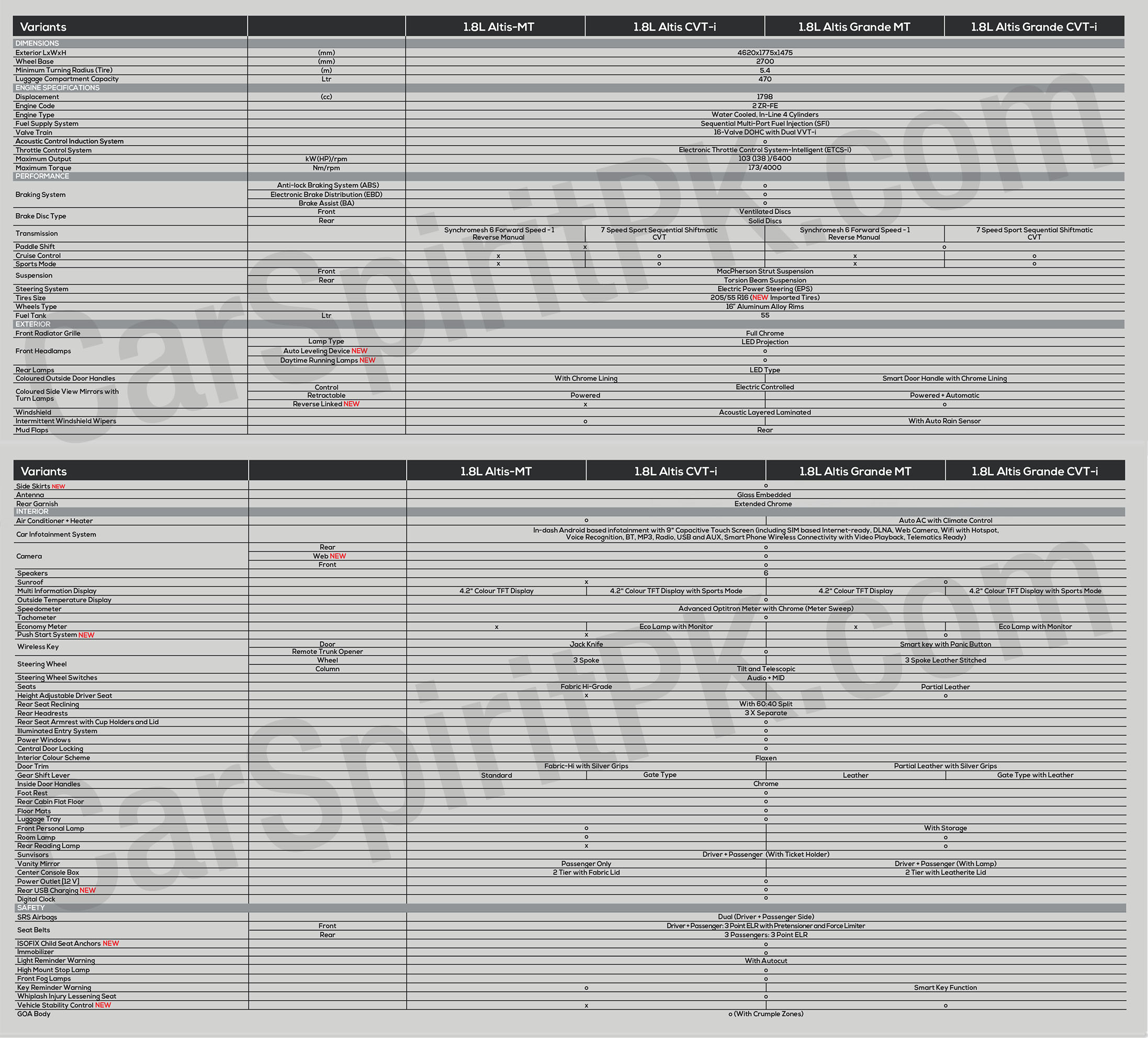