Having replaced the 30-year old Mehran in June 2019, the new entry level hatchback by Pak Suzuki– the Alto 660cc went on to become the bestselling car within a couple of months, despite a horrific market slowdown. In September 2019, the Alto 660cc managed to breach Pak Suzuki’s highest-ever monthly sales record with 4,924 units breaking the previously-held record of Suzuki Mehran which was 4,684 units.

Although Pak Suzuki increased the prices of Alto up to three times within just 6 months of its launch, its sales continued to escalate. To date, the company has sold nearly 29,000 units of the Alto which is by far the best figure achieved by any locally assembled car ever. However since the beginning of this year, the craze of new Alto is seemingly subdued.

Having sold 3,700 units in December 2019, the Alto saw only 1,794 units leaving the showrooms in January 2020 registering a deplorable 52% dip in sales. The decline continued in the month of February when Pak Suzuki recorded the lowest ever sales of Alto with just 1,620 units sold. It is imperative to mention that the company has produced some 7,245 units in the last 2 months but has managed to sell just 3,414 of them according to the data from PAMA. Reportedly the company has thousands of unsold Alto 660cc units at its disposal that are waiting to find buyers.

In order to reinvigorate the dropping sales, Pak Suzuki is offering ‘Free Registration’ with the purchase of Alto. The offer can be availed within the month of March 2020. Though Pak Suzuki has connected the offer in celebration of its 29,000 unit sales since the car was launched back in June 2019, it’s quite easy to understand the reason of alluring the offer. 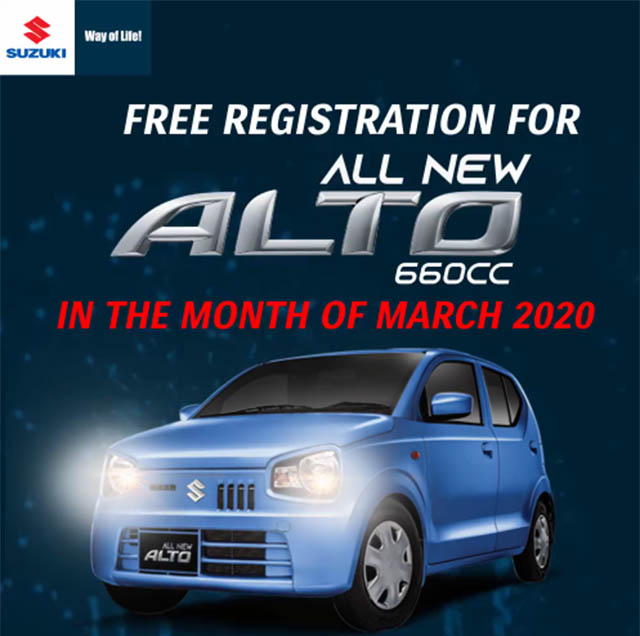 However the real reason for such a massive decline in sales is the price increase which no one really seems to be discussing about. Having already made multiple price hikes within the first couple of months of its launch, Pak Suzuki announced a massive price increase on all of its models in December 2019 including the Alto, the prices of which were revised by 90,000 for the VXR and 80,000 for the VXL AGS trim. These prices became effective from January 2020.

Surprisingly however, there was no additional duty or tax imposed by the government while the Rupee actually recovered by 5.5% during this period and remained stable for last many months. According to Pak Suzuki spokesperson Shafiq Ahmed Sheikh, the company has been posting losses since the last four consecutive quarters, due to which it made a “moderate” price increase.

Whether the “Free Registration’ offer will be able to lure buyers to magnetize back to purchasing the Alto, we will have to wait to find out. However a price reduction will certainly bring much effective results, the move which unfortunately is not under consideration of any local assembler.

wpDiscuz
Tags:Alto 660Pak SuzukiPAMA
previousGeely to Build its Own Satellite Network
nextCar Sales Declined by 43.4% in First 8 Months of FY19-20