Sazgar in Ties with Another Chinese Automaker

Sazgar Engineering Works Limited, the makers of 4-stroke CNG rickshaws and the ones behind bringing in BAIC cars in Pakistan under the Auto Policy 2016-21 has revealed to have signed another ‘vehicle assembly and technical cooperation agreement’ with a renowned Chinese brand.

This was disclosed in a letter to the Securities & Exchange Commission of Pakistan, however the company hasn’t revealed which Chinese automaker it has now joined hands with. According to the letter, the assembly, sales and after sales service of passenger & commercial vehicles is subject to the approval from relevant government authorities. 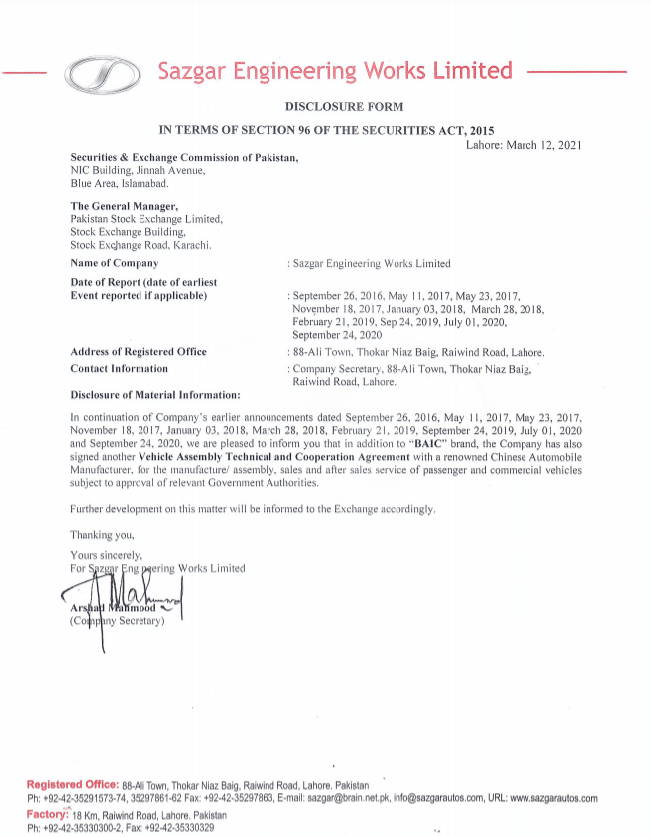 This seems like a new trend in the auto sector to have deals with more than one carmaker. Al-Haj in addition to FAW joined hands with Proton, followed by Lucky Motors which in addition to KIA are now bringing in Peugeot branded cars in Pakistan.

Related: Sazgar to Launch Its First Car within the Next 3 Months

BAIC cars under Sazgar’s umbrella were seen testing on the local roads since last couple of years whereas the company has displayed a range of vehicles including D20 hatchback, X25 crossover and BJ40 Plus SUV at various auto shows as well however formal launch of any of these vehicles is yet to take place. The company in its financial report said:

“The COVID-19 pandemic has adversely affected the progress of four-wheeler project; however, it is hoped that the project will be completed by the end of March 2021 and would be ready to commence trial production.”

More information on this development will be shared as & when available, stay tuned to CarSpiritPK.