The 3 million cumulative production milestone has come after 46 years and 9 months after Suzuki started manufacturing operations in Indonesia. While the milestone day was actually 6th December 2022, PT Suzuki Indomobil Motor held a ceremony at the Cikarang Plant on 16th January 2023.

The company currently produces four passenger vehicles – the Carry, APV, Ertiga, and the XL7. The 3-millionth vehicle was an Ertiga Hybrid model produced at the Cikarang plant. 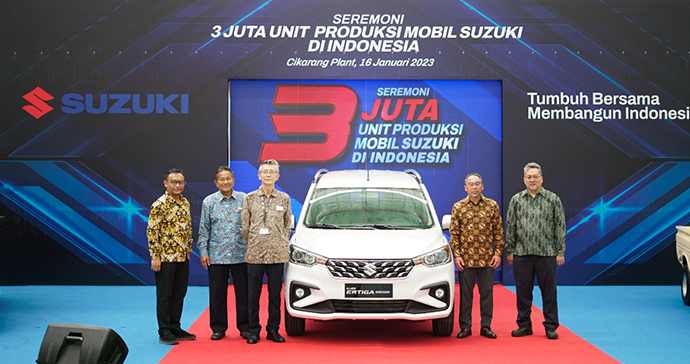 Suzuki’s Automobile production in Indonesia started in March 1976 at the Pulogadung plant. The Tambun plant opened in 1991, and the Cikarang Plant in 2015. In addition to automobiles, SIM also produces motorcycles at the Tambun Plant. Shingo Sezaki, President Director of SIM, said during the ceremony:

“Suzuki shall continue to provide products that satisfy our customers in Indonesia and exported countries, according to our mission statement, ’Develop products of superior value by focusing on the customer. I express my gratitude to all of our supporters and stakeholders that have made this 3 million milestone possible, and would appreciate your continued support.”