Hyundai recently concluded its N Day 2022 presentation, where it showed off two exciting “rolling lab” concepts that company says demonstrate its “ambition to become a leader in the zero-emissions future.” Bear in mind the “N” badge represents Hyundai’s high-performance lineup with both concepts sporting some enticing figures. The N Day comes once in a year when Hyundai fans eagerly await to see the future of performance cars from the South Korean manufacturer. 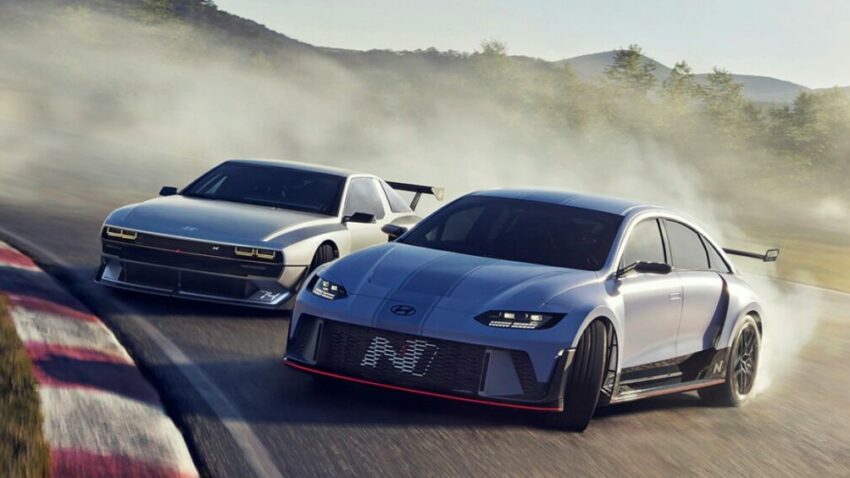 The Hyundai RN22e is a racetrack focused version of Ioniq 6 which is used by the company as a Rolling Lab for the future Ioniq 6 N which is expected to debut in 2023. The RN22e has the same 77.4kWh battery as the future Ioniq 6, but many parts have been upgraded. The front and rear track is much wider and the body panels have been changed accordingly.

The front bumper is clearly designed for motorsport and the rear wing completes the aggressive looks. The front bumper channels the airflow to the sides to cool the brakes and through the hood to boost the downforce. The camera mirrors of Ioniq6 are replaced with standard motorsport items as per regulation requirements. The concept rides on 21” rims wrapped in Michelin Pilot Sport+ rubber and sits at least 50mm lower than the standard Ioniq 6. Inside there is a full roll-cage and performance bucket seats instead of the standard ones.

Under the hood is a twin-motor AWD system that delivers 585 hp (430kW) with a combined torque of 740Nm. Top speed is rated at over 250km/h and unsurprisingly it takes 18 minutes to charge the battery from 10 to 80%. 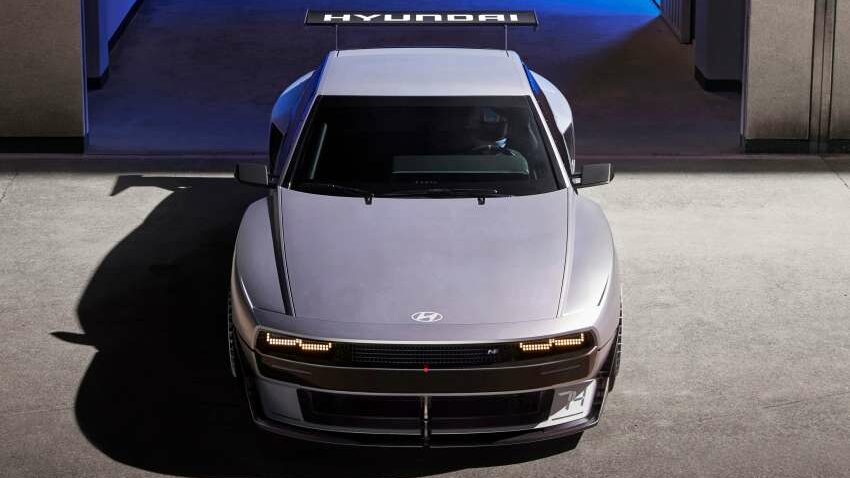 The N Vision 74 concept is inspired by the futuristic N 2025 Vision Gran Turismo and Giorgetto Giugiaro-designed Pony Coupe concept from 1974. The retro-inspired shape has been amplified by large front splitter, air extractors for the front wheels, side intakes incorporated into the rear fenders, a prominent rear diffuser as well as a large rear wing. Hyundai has also bought down the roof line and body closer to the ground with the vehicle standing just 1,331 mm tall. 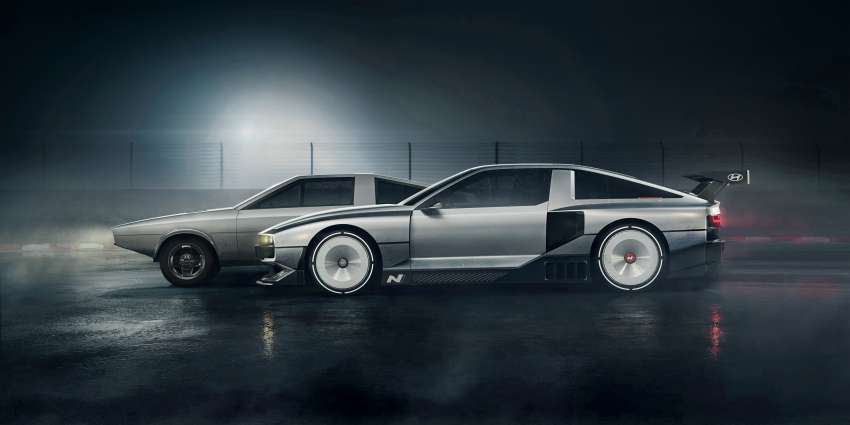 The N Vision 74’s rear window features a row of slats instead of being one single pane of glass. Finishing touches include headlamps, taillights and F1-inspired rear brake light that feature a dot-matrix theme similar to that of the Ioniq 5, along with a set of large aero-style wheels. According to Hyundai, N Vision 74 measures 4,952 mm long, 1,995 mm wide and has a wheelbase of 2,905 mm making it a much bigger car than it looks in the pictures. For reference, the 8th gen Sonata we have here measures 4,900mm long, which means the N Vision 74 is even larger than the D-segment sedan. 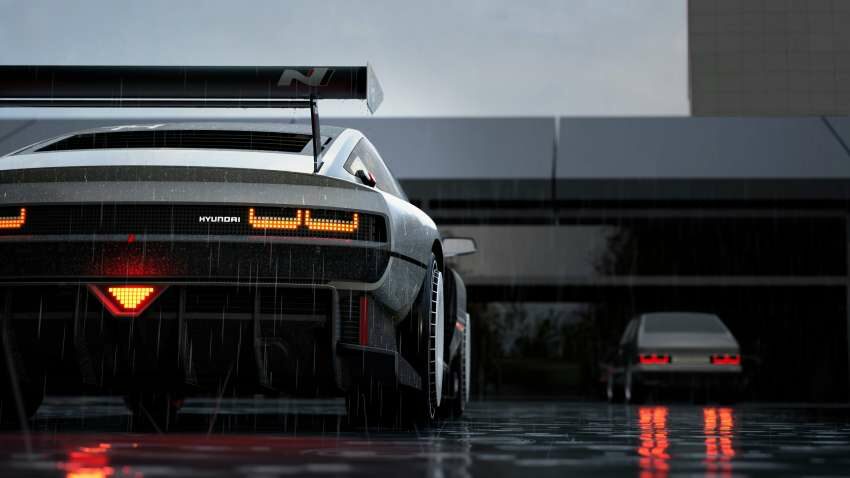 Under the hood, the N Vision 74 features a hydrogen fuel cell hybrid system having two tanks under the rear window that carry a total of 4.2 kg of hydrogen which is fed to an 85-kW fuel cell stack at the front of the vehicle. The energy generated by the fuel cell stack is sent to charge an underfloor-mounted 62.4-kWh lithium-ion battery, and takes just 5 minutes to get them topped up if the tanks are depleted. Alternatively, the vehicle can also be plugged in to recharge the battery, as the hydrogen fuel cell hybrid system also supports 800-volt fast charging, just like the Ioniq 5. 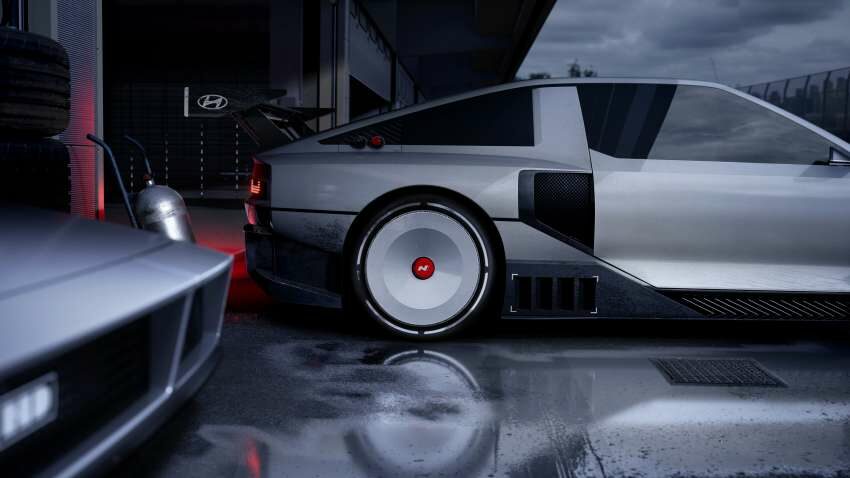 Power from the battery powers a pair of electric motors rated at over 670 hp (500 kW) and 900 Nm of torque, all of which is sent to the rear wheels. This helps the N Vision 74 sprint from 0-100 km/h in just 4 seconds and is able to achieve a top speed of over 250 km/h. With full hydrogen tanks and a fully charged battery, it can easily run for 600 km. 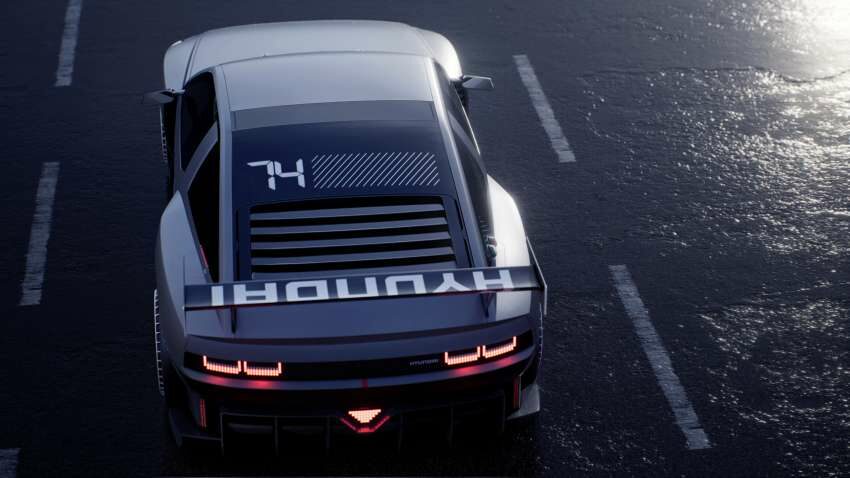 According to Hyundai, the powertrain has a fine-tuned logic system that enables better torque vectoring by the twin motors for “a precise and responsive cornering experience.” The various openings on the exterior aren’t just for show either, as they are integral to the vehicle’s three-channel cooling system and aero-package. Huyndai however says there won’t be a production version of N Vision 74 in near future but “the concept will continue to be tested and verified by Hyundai’s engineers, so future N road cars can be equipped with their advanced technologies.”