MG Pakistan has issued a statement as per which it has indicated to take action against those involved in spreading baseless rumors and maligning campaigns against the company. MG says the competition is good and even a healthy criticism is appreciated but it will not tolerate deliberate and well orchestrated spread of damaging false rumors and mischievous maligning campaigns in future. 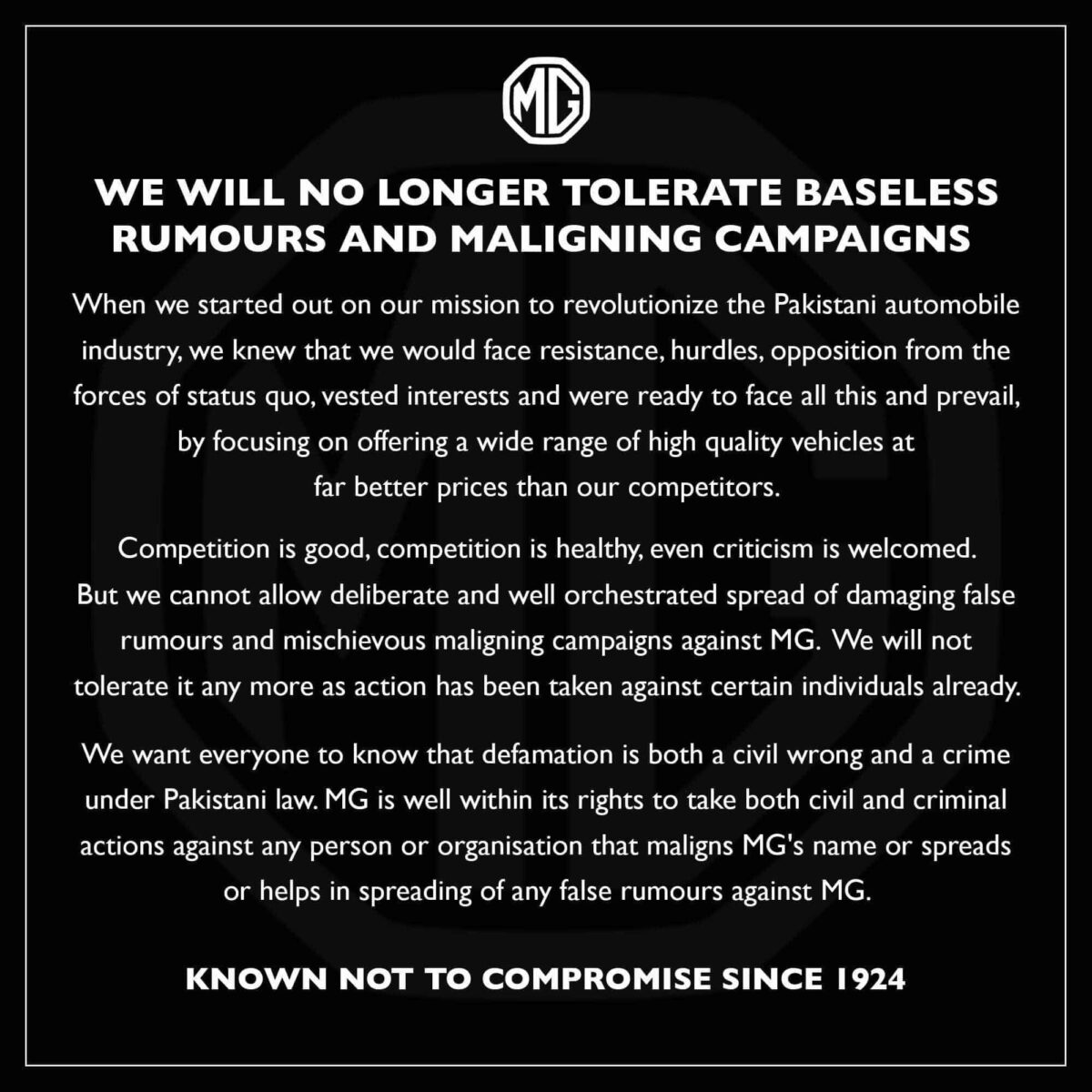 The notice also reads that MG has already taken action against certain individuals without mentioning their names. MG reminds that defaming is a crime under Pakistani law and the company has the rights to take legal actions against any person or organization involved in such activities.

Ever since MG stepped in our market, it has been in the news in one way or the other. Earlier this year, Javed Afridi who is a key figure behind MG cars in Pakistan tweeted when the company was facing the under-invoicing probe, and said: “as the new entrants bring in exciting new models at far lower prices, instead of competition, we expect maligning campaigns and baseless rumors.”

For decades, Pakistani automobile consumers have been exploited by cartels that cornered them with low quality, boring models at exorbitant prices. Plus, buyers had to pay billions of rupees to get delivery of the very vehicles the price of which they had already paid. 1/3

Later in August, Javed Afridi shared views regarding MG’s commitments to introduce latest models with advanced technologies & best in class safety features in Pakistan. He mentioned that the delays in deliveries of CKD and CBU units is due to the global chip shortage and said negative propaganda is being spread by competitors alleging MG for fraud & misconduct, overbooking, under-invoicing and lack of availability of spare parts. He called MG Pakistan a “Tehreek” (movement/ motivation) & assured that MG will stay in Pakistan and will not deviate from the goal of increasing consumer value in local auto industry.

Javed Afridi has also recently urged to the government to implement WP29 Harmonization of Vehicle Regulation on Safety, and asked the government to exclusively give market access to only “approved” vehicles in the country.

Do you think MG is up against the forces of status quo & will prevail against the existing competition? Let us know with your comments.