BYD has launched its all-electric e6 MPV for private buyers in India for INR 29.15 lac. The MPV is available in two trim levels: GL and GLX, with the latter offering AC fast charging.

The BYD e6 MPV was launched last year in the Indian market at the same price, however it was only available to commercial and fleet buyers. With its entry into the private passenger vehicle segment, the e6 is now the only full-electric MPV available in India.

The e6 MPV is based on BYD’s e-platform and has a 71.7kWh LFP Blade battery back paired to a single front-axle mounted electric motor producing 95hp and 180Nm, allowing the e6 to reach a top speed of 130km/h & up to 500 km of drive range. The e6 MPV also has regenerative braking and supports DC fast charging, which charges the car from 30-80% in 35 minutes and takes 90 minutes to fully charge the battery. The GLX trim level also includes a 40kW wall-mounted AC fast charger that can charge the battery in just 2 hours and a 6.6kW AC slow charger that can charge the battery in about 12 hours.

LED DRLs, leather seats, 6-way adjustable driver and front passenger seats, a 10.1-inch rotatable touchscreen with Bluetooth and WiFi, in-built navigation, and a CN95 air filtration system are among the worth mentioning features of the e6 MPV. As the only full-electric MPV available in India today, the e6 has no direct competitors. However, the Hyundai Kona and MG ZS EV are two similarly priced electric vehicles available in our neighboring country.

Keep in mind after opening its showroom in Delhi, BYD has now inaugurated its first passenger vehicle showroom in Mumbai which is the fifth showroom by BYD in India. Sanjay Gopalakrishnan, Senior Vice President of Electric Passenger Vehicle Business of BYD India said “Mumbai is one of the key markets for BYD India and the city is seeing a shift toward electric vehicles with a trend among buyers to prefer EVs rising in the territory.“ 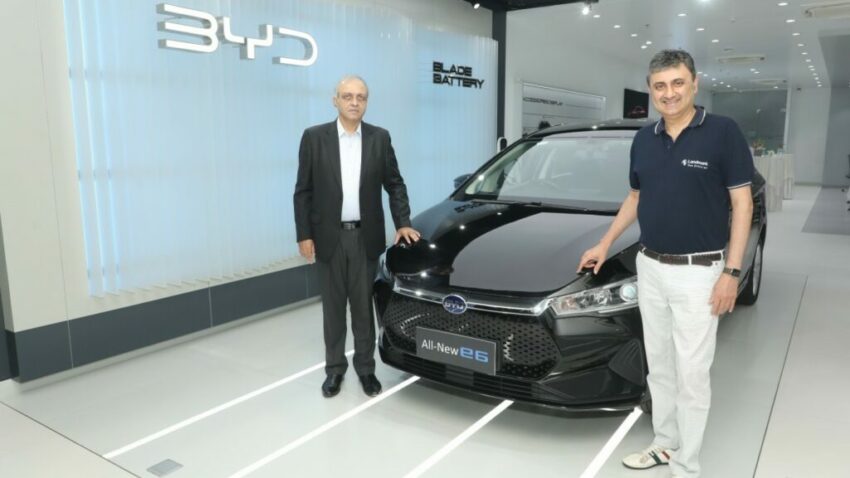 BYD is also working on providing localized and green products for the Indian market because the government is targeting 30% EV penetration for the passenger vehicle segment by 2030 and aiming to achieve net-zero emissions by 2070. A study done by the World Resource Institute of India says that the total EV-charging energy demand in the city of Mumbai is expected to be 550 MWh by 2025. This anticipated demand would imply the need to set up at least 21,096 charging points across Mumbai by 2025. In July 2022, the Maharashtra Electric Vehicle (EV) Policy 2021 was announced with a number of benefits to accelerate EV sales and stimulate manufacturing.

BYD which surpassed Tesla to become the highest-selling EV maker in the world is also about to introduce the Atto 3 EV in India which is expected to be formally launched on the 11th of October 2022.