Chery Omoda 5 Confirmed for South Africa- Is Pakistan Next?

Just days after making its debut at the 2021 Guangzhou Auto Show, the Chery Omoda 5 has been confirmed for South Africa, one of the few key Right Hand Drive car markets like ours. According to Chery, the Omoda 5 will be introduced in South African market towards the second half of 2022 and will take on the likes of Honda HR-V, Mazda CX-3 and Hyundai Kona.

Having stunned the crowds at this year’s Guangzhou Auto Show, the Omoda 5 features Chery’s newly developed “Art in Motion” design language. The Omoda 5 features a comprehensively equipped interior utilizing two integrated and curved 10.25-inch high-definition digital screens that offer easy and intuitive control of all the car’s important driving, climate and entertainment settings. Chery also confirms that the Omoda 5 cabin will offer a comprehensive list of the most modern technologies and creature comforts.

Under the hood the Omoda 5 gets powered by a 1.6L TGDI unit from Chery’s new Kunpeng engine family, the turbocharged four-cylinder engine produce 194 hp of power and 290 Nm of torque with power sent to the front wheels via a 7-speed dual-clutch transmission. Hybrid and all-electric versions will also be offered in later stages according to the company. 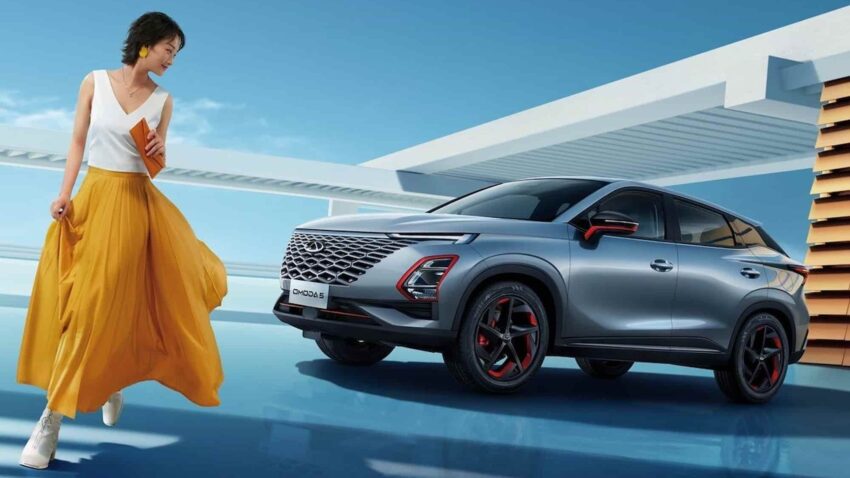 “There are few other industries that have the opportunity to combine beautiful design and mechanical performance like the automotive industry. But unfortunately, motorists who have been enticed by beautiful and futuristic designs from motor shows are left with very watered-down designs when these reach the showroom floor. We are changing that with models like the Omoda 5.”

Chery has recently launched the Tiggo 4 Pro in South Africa and is expected to introduce the same in Pakistan as test unit has already been spotted. According to Ghandhara, Chery vehicles (Tiggo-4 and Tiggo-8) will be formally launched within this fiscal year. However given the ongoing crossover craze & with Omoda 5 now confirmed for South Afirca– an RHD market, somewhere down the line we can expect Chery to launch the Omoda 5 in our country too. Read more about the Chery Omoda 5 below: