By 1980s, Japanese automakers had already established their name for making reliable & well-built economy cars, but whether they could build a credible luxury car was a question mark.

In 1983, the then Toyota president Eiji Toyoda challenged his company to build “a car that is better than the best in the world.” It was a remarkable ambition, and there were many in the automotive world ready to dismiss the idea as a sheer fantasy. After all, how could a business with no experience of the international luxury car market have any hope of matching, let alone exceeding the achievements of the industry’s established leaders? Even within Toyota there were doubters who said his plans were simply impossible. Eiji Toyoda was largely responsible for bringing Toyota Motor Corporation to profitability and worldwide prominence during his tenure as president and later, as chairman. He was succeeded as the president of Toyota by Shoichiro Toyoda.

The Birth of Lexus LS400

Nevertheless the project called the F1 “Flagship No. 1 vehicle” also called “Circle F”, was kicked off in 1983. Its aim was to produce a world-class luxury sedan for the international market. The F1 project was not given any time frame for completion nor did it appear to have any budget constraints, as a result the vehicle was entirely new as it did not use parts from the existing Toyota parts bin. The final cost of the development was more than 1 Billion US$. 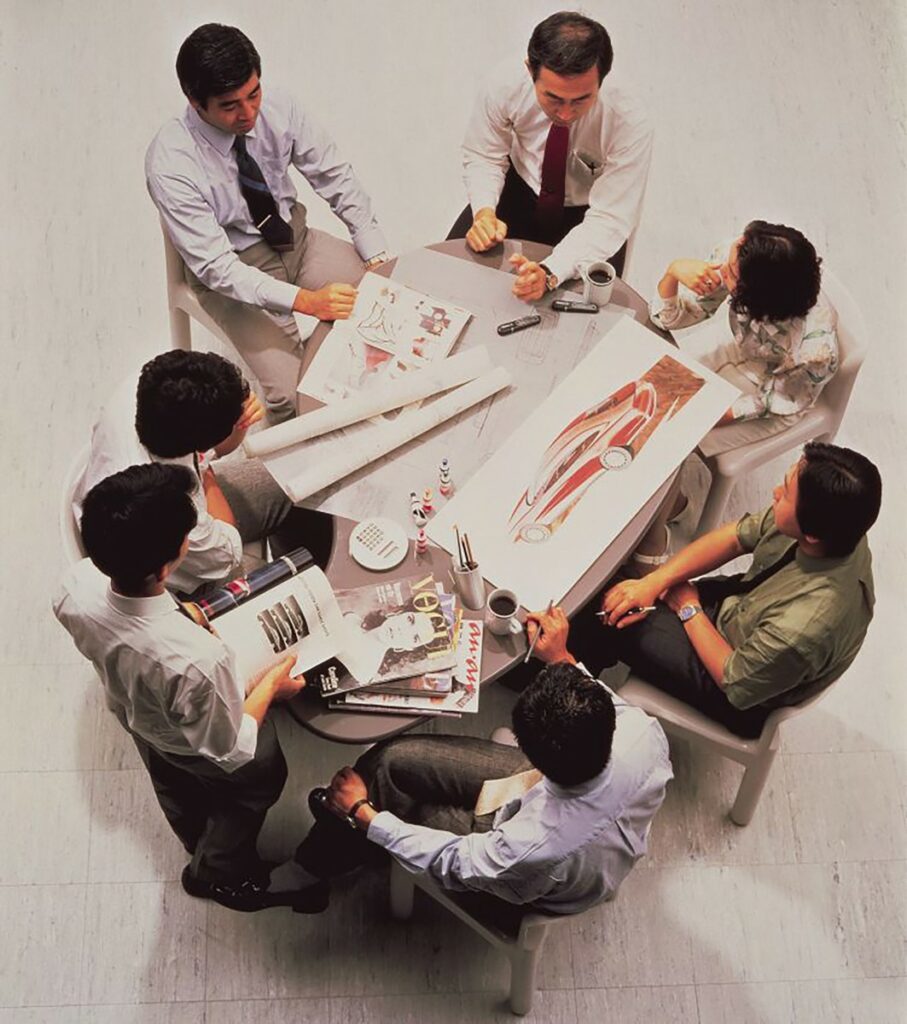 More than 4,000 people were involved in bringing it to fruition. Right from the start, the targets set for the the new luxury car were exceptional. Its top speed had to be 250 km/h, yet it was required to deliver 10 km per liter fuel economy. Also when cruising at 100 km/h, the noise level in the cabin would not exceed 58 dB. To put those figures into context, the car would have to be faster, quieter, more aerodynamic and more fuel-efficient than any of its German rivals. Each goal on its own was ambitious; for them all to be achieved together seemed quite impossible.

What made the task all the more difficult was that Toyota had never built anything like the LS before. A master of mass-market models driven by millions of people around the world, it was entering completely new territory. When the project kicked off, Toyota already had a “luxury” vehicle for the Japanese domestic market, called the Century. However right from the start it was clear that the Century was not the kind of car that could compete in the global market. Fortunately, rather than being intimidated by the scale of the task, there were key people eager to meet the challenge. The project team had to learn what luxury meant to international customers. What did they look for in a premium car and how did it fit their lifestyles? Speaking to focus groups, exploring the lifestyles of their target customers and analyzing the marketplace, they were able to distil the key qualities needed for success. What they learned surprised them. Their research revealed that the top priority for American & European customers was a prestigious image; performance was considered only the fourth most important quality. This was going to be a tough battle to win against the established market players, but there was no let-up in the program.

As the new car was to compete with all of the prestigious models offered by the worlds existing manufacturers, it had to excel in all areas including comfort, aerodynamics, performance and refinement. As part of the development process 450 vehicle prototypes and 973 engine prototypes were constructed and they logged approximately 2.7 million kilometers testing in all climates and environments from winter roadways, to deserts in Arizona, Australia, the USA and Saudi Arabia. 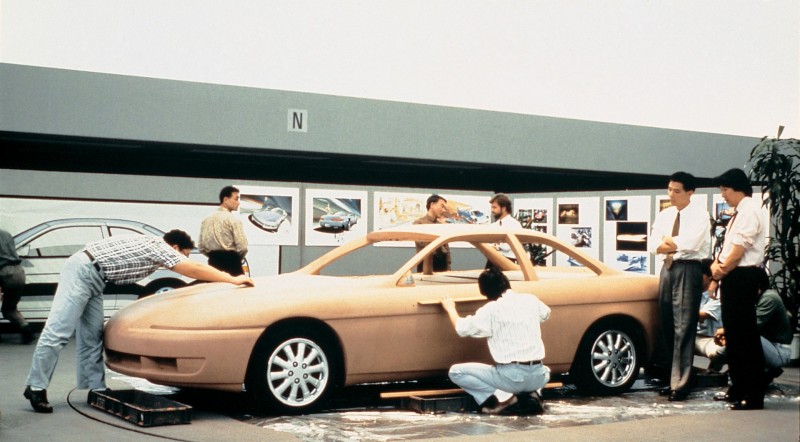 In 1985 the first exterior models were presented to the Toyota management, featuring a low sports car type design, but by 1986 this had been changed to a classic three box design with a more upright stance, prominent grille, and two-tone paintwork. Dozens of wind tunnel tests were conducted, with cars fitted with interior microphones to pick up any intrusive wind noise. The commitment to excellence continued, 14 full scale models were built in a 16-month period, compared to around just 6 for most new cars. Based on these wind tunnel tests, refinements were made to the design to produce a very low drag coefficient of Cd 0.29 for production vehicles of that time. 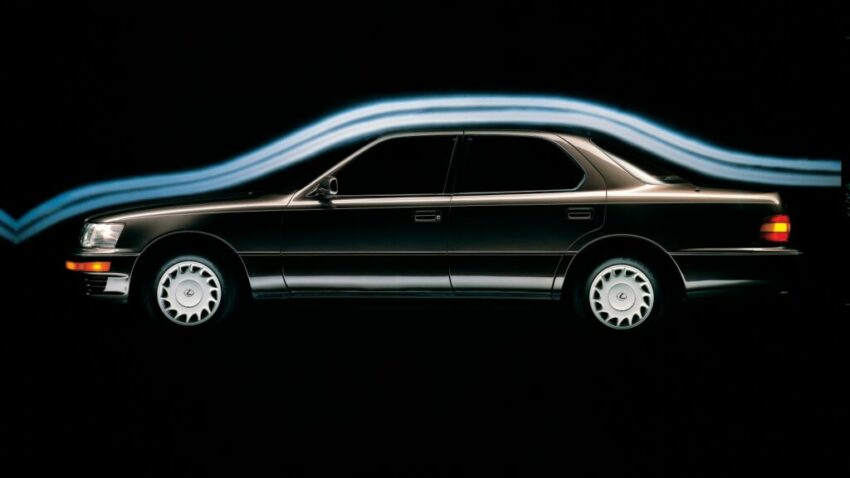 In 1986, the Lexus marque was created to convey the launch of the flagship sedan and the vehicle was thenceforth known as the Lexus LS400. The “Relentless Pursuit of Perfection” was the phrase used to define the new Lexus brand. The design of LS400 was finalized in 1987 with the designated chassis code UCF10.

The LS called for both a new vehicle platform and a new engine. A 4.0L quad-cam V8 all-aluminum unit that produced 241hp was developed. As with every other aspect of the car, intensive efforts were invested to make sure the engine was exactly in every detail. The end result was exceptional, it was every bit as smooth and refined with quality captured in Lexus’ first-ever television add, the famous “Art of Balance.” A pyramid of champagne glasses is built on top of the LS’ engine as the car accelerates on a rolling road towards 240 km/h. The glasses do not move and are filled with Champagne, with not a drop spilled. This stunt was recreated by many people again and each time the LS 400 came out triumphed.

Toyota had went to unprecedented lengths to solve every single issue during development. For example, much time was spent trying to identify the source of one particular noise from the drivetrain. It was eventually traced to an irregularity in the shape of the driveshaft that caused vibration and a noise that grew louder as the shaft’s rotation speed increased. Toyota then made the driveshaft from a different, high-tensile steel to solve the problem.

LS400 measured 4,996 mm long, 1,829 mm wide and 1,415 mm tall with a 2,814 mm wheelbase. In terms of design,  LS400 couldn’t afford to deter customers if the look was too radical, nor too ordinary. This meant conforming to a degree with the familiar, square-ish lines of the established luxury market models, while breaking new boundaries in terms of sleek, aerodynamically efficient styling. The end result exuded an air of dignity, solidity, and sensibility. The cabin design was rigorous in its attention to craftsmanship detail, from the fine leather chosen for the upholstery and the choice of wood used for the trims. Around 24 different varieties were assessed by Toyota. This was not just reinforcement of what customers expected of a luxury car, there was innovation, too. For example, in creating the instrument panel, Toyota went against the modern trend for digital displays and instead came up with a new take on analogue dials, making each needle an individual fluorescent tube – miniature “light sabers” that illuminated before the rest of the instrumentation. 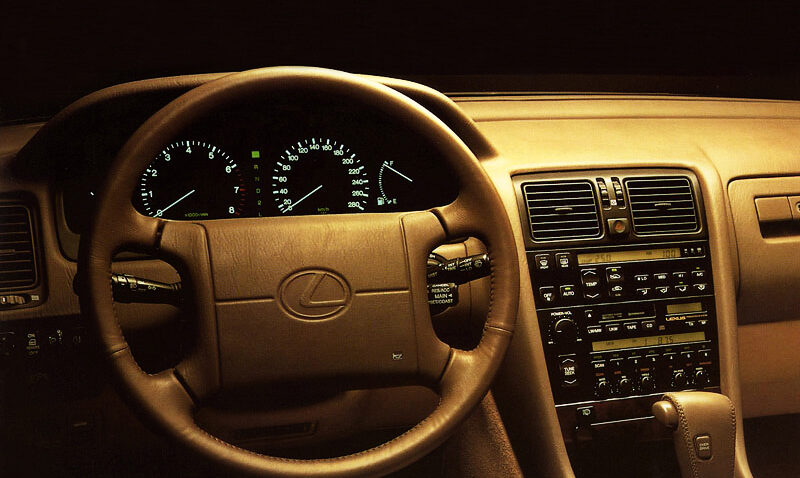 The new LS had to prove that it delivered on its promises, not just in isolation, but in the context of the vehicle as a whole. Toyota built 450 test cars and between them they covered more than 4.4 million kilometers on the 26km Shibetsu proving ground. The test track featured every kind of road surface the car would encounter in the real world, from rough tracks to super-smooth highways. Finally the all-new Lexus LS400 was unveiled at the 1989 North American International Auto show in Detroit. The LS400 made its debut to huge acclaim, the positive response of industry media and experts was matched by public enthusiasm: sales met the ambitious targets and the LS 400 quickly emerged as one of the most popular car and Lexus became a trusted brand name.

LS400 took on the established name in style and literally stunned the public and the competitors alike. The chassis had an independent, double-wishbone suspension with an optional air suspension system. The LS400 boasted a quieter cabin than virtually any of its competitors and the top speed of 250km/h with a 0-100km/h sprint time of 8.3 seconds beating all of the major competition offered by BMW and Mercedes-Benz etc. 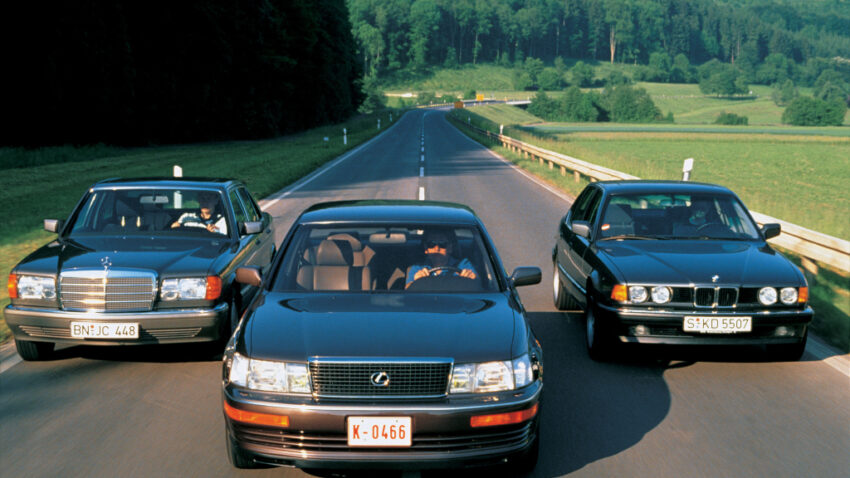 The list of ground breaking features offered in the car was quite long. LS 400 was one of the first cars to feature an automatic motor driven tilt-and telescope steering wheel. It had SRS airbags, power adjustable shoulder seat belts, and an electro chromic rear-view mirror. It had power-adjustable leather seats, the dashboard featured an electroluminescent gauge cluster with visual effects whereas optional equipment included a Nakamichi premium sound system, an integrated mobile phone, gold badging and of course air suspension.

With LS400 and Lexus, Toyota literally did the unthinkable. The LS400 is highly regarded as an ‘engineering revolution’ and earned praise from even the most authoritarian motoring journalists as being the best car in the world. And as David E. Davis (late), the renowned editor and publisher at Car and Driver magazine and the founder of Automobile magazine famously wrote after he test drove the LS400 in 1989:

“All you guys from Munich, Stuttgart, and Coventry, call your offices. I’d say the fox is about to find his way into the henhouse.” 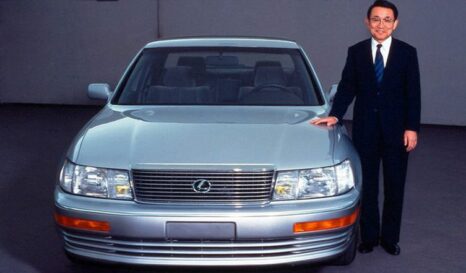 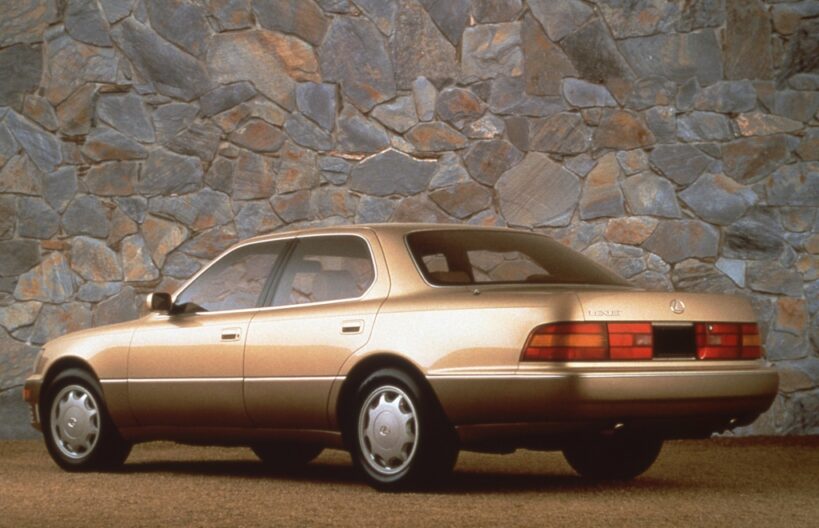 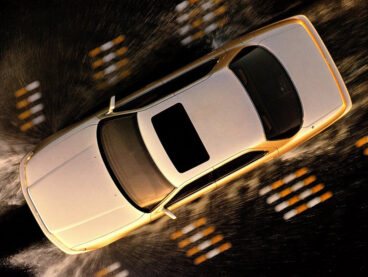 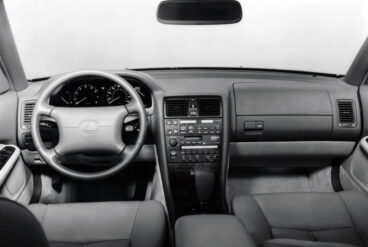 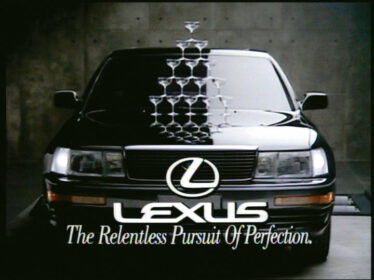 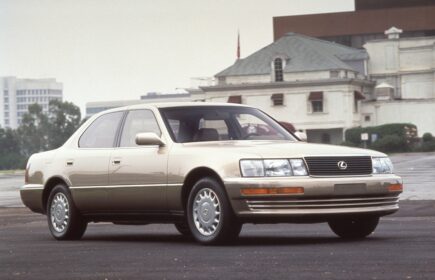 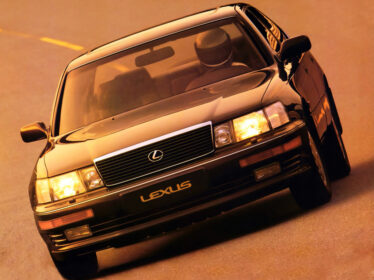 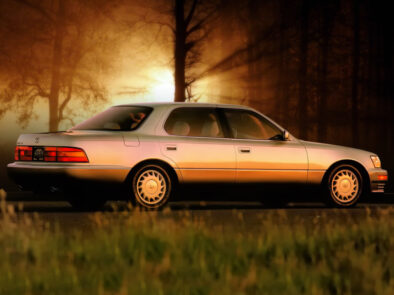 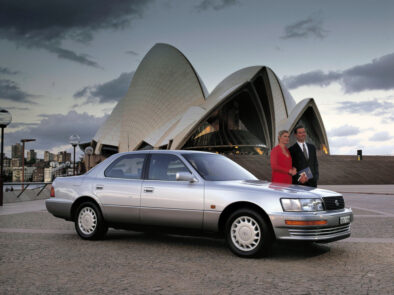 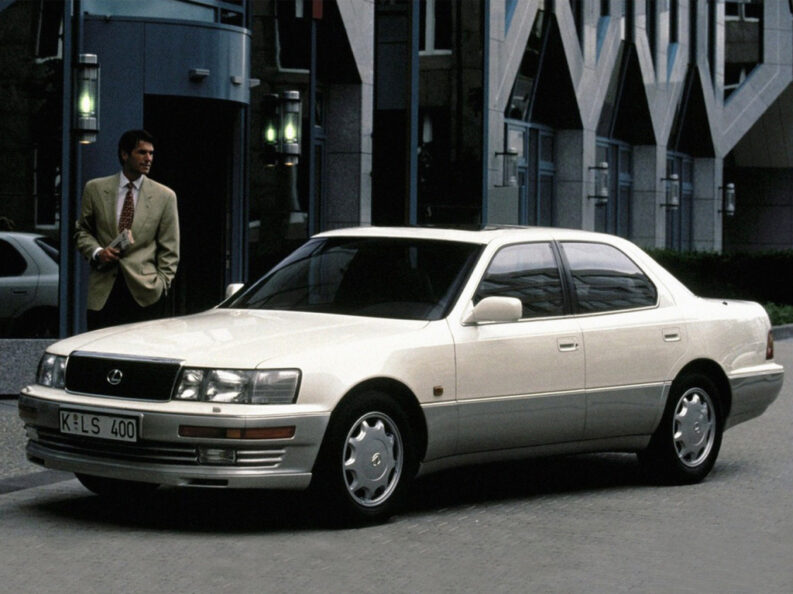