2022 Skoda Slavia is the Latest Honda City Rival in India

Skoda unveiled the new Slavia sedan in India as a replacement of the Skoda Rapid which was on sale for over a decade. Built on the made-for-India MQB-A0-IN platform, the Slavia is a B-segment sedan that competes primarily against the new Honda City as well as Maruti Suzuki Ciaz, Hyundai Verna and Volkswagen Vento. Keep in mind Toyota Yaris went out of equation as it was discontinued in India last year due to poor sales.

The Slavia is the second new model to be introduced under Skoda’s India 2.0 project, with the Kushaq SUV being the first when it was introduced in March 2021. According to the Czech automaker, the majority of the development work for the Slavia was carried out within India and the sedan is produced at the company’s plant in Pune, Maharashtra with a localization level of up to 95%. 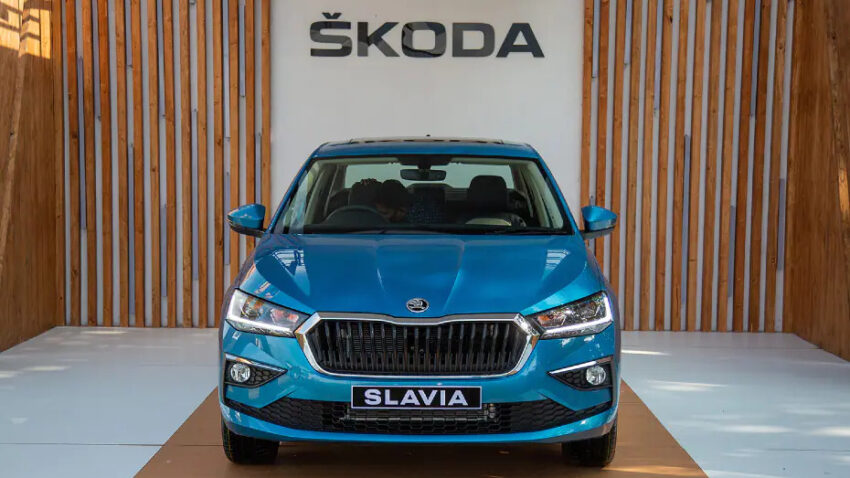 Despite being an entirely new car, the Slavia maintains its DNA with Skoda’s design theme as far as the looks are concerned. Up front there is a  hexagonal-shaped grille flanked by angular headlights, which come with halogen lamps or LEDs units depending on variant. There are also L-shaped LED strips acting as DRLs, while the lower intake runs across nearly the vehicles’ entire width and merges with black, C-shaped fog lamp surrounds. 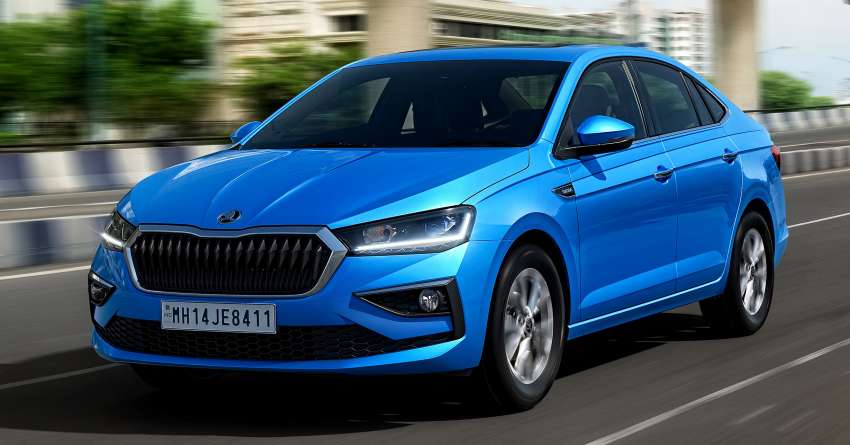 Towards the back, the new Skoda Slavia gets two-piece LED taillights in a C-shaped design that extends into the boot lid. The rear apron mimics that of the front, with a wide-width trim piece in black having reflectors elements accentuated by a chrome strip. Depending on the variant, there are three different wheel types – 15-inch steel, 16-inch silver alloys and 16-inch dual-tone brushed alloys. The interior features twin-spoke steering wheel, a touchscreen infotainment system and circular air vents. There is a utility recess at the top of dashboard, which Skoda says is where the driver can keep a lucky charm in clear view, which is rather thoughtful. The Slavia comes available in three trim levels: Active, Ambition and Style. 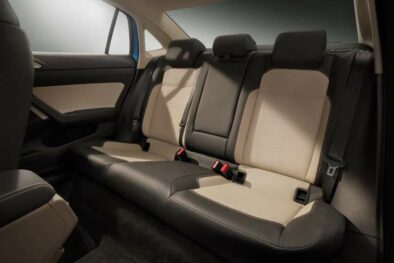 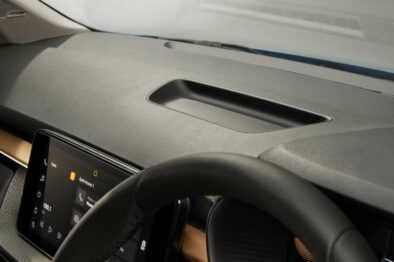 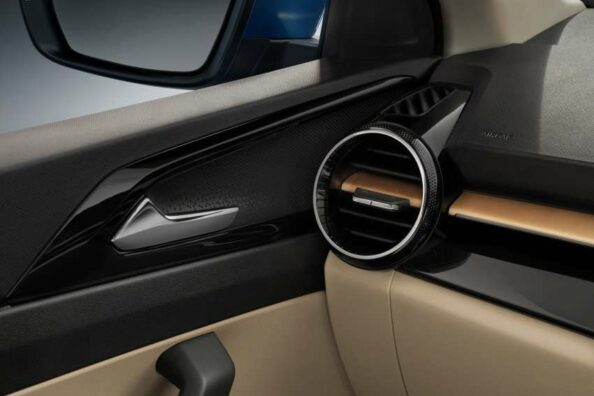 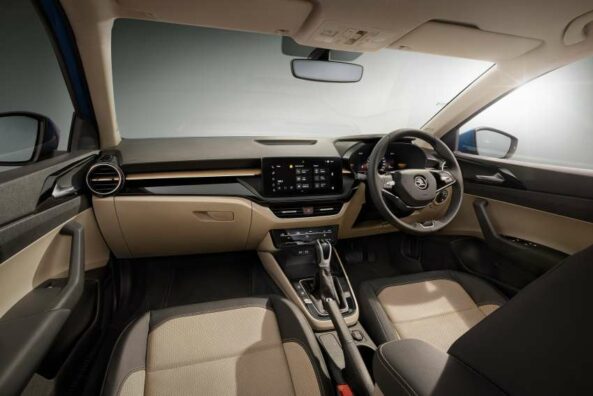 As for dimensions, the Slavia measures 4,541 mm long, 1,752 mm wide and 1,487 mm tall with a class-leading wheelbase of 2,651 mm. Overall it is much larger than the Rapid sedan it replaces and almost equal to the new Honda City. With the increased footprint, the new Slavia also boasts a boot space of 521 liters, which is 61 liters more than what the Rapid offered. 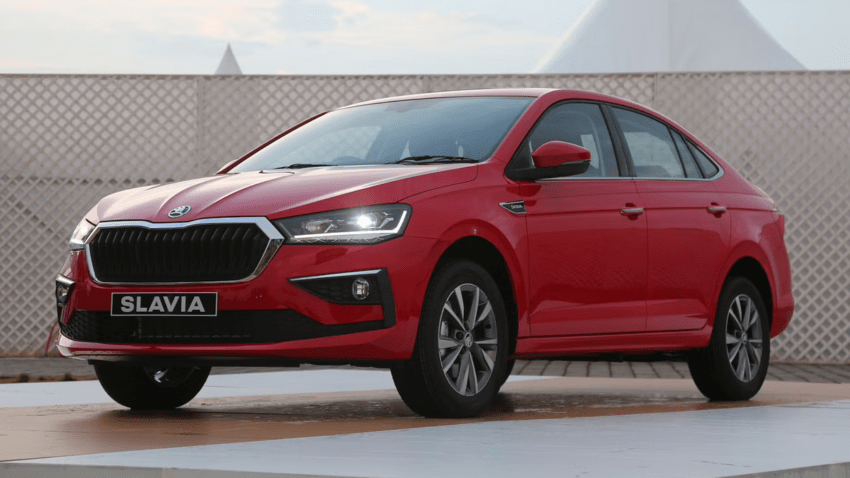 In terms of safety, the top-spec Style variants are equipped with 6 airbags, ESC, an electronic differential system (EDS), a tire pressure monitor (TPMS), a reversing camera, multi-collision brake and ISOFIX child seat anchors – whereas Hill-Hold Control, automatic headlamps and auto wipers are optional. Lower variants will still come with ESC, ISOFIX and a TPMS as standard, but misses out on some of the Style’s other features.

The Skoda Slavia is available with two turbocharged petrol units from VW Group’s TSI family of engines. The smaller of these is a 1.0L three-cylinder motor that offers 115hp & 175Nm, while the bigger 1.5L engine churns out segment-leading 150hp & 250Nm. It also offers cylinder deactivation technology to enhance fuel economy. Both the engines come mated to a 6-speed manual transmission as standard but buyers can opt for a 6-speed torque-converter automatic gearbox with the 1.0L unit or a 7-speed DSG with the 1.5L mill. 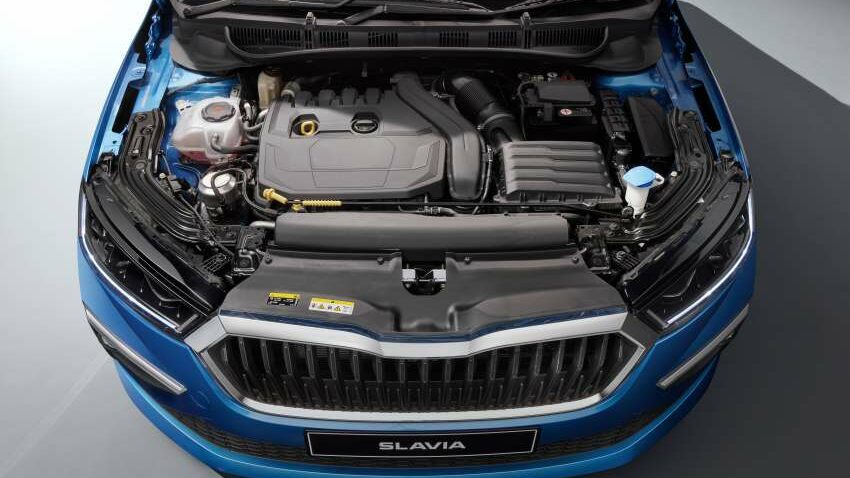 Pakistan will likely welcome Skoda cars in 2023. According to the statement issued last year by Premier Motors Limited (PML), a licensed assembly partner of the German auto giant, Volkswagen Group:

“Volkswagen Group, known for its attention to detail and emphasis on product safety and quality, plans to enter CKD assembly with Premier Motors Limited in a cutting-edge, fully integrated production plant. This plant will mark the entry of locally assembled Skoda and Volkswagen premium cars for the first time in the country. The plant is situated in Hub, Baluchistan, with a capacity of producing 30,000 vehicles per year. The construction of the plant began in July 2021 and it is going on in full swing.” VW plant is being constructed at Hub area at the outskirts of Karachi however the pace of the project is much slower than expected. Previously it was reported that the plant will begin rolling off locally assembled units in 2021 but the project hit a speed bump with delays due to the COVID-19 pandemic & lockdowns.

Although there is no definite announcement regarding which VW and Skoda vehicles will be launched in Pakistan, but it is speculated to be commercial vehicles (pickup trucks & vans) in case of Volkswagen and crossovers under the Skoda badge. However the likes of Slavia, if introduced can become a welcome addition to the available flavors of B-segment sedans in the market. 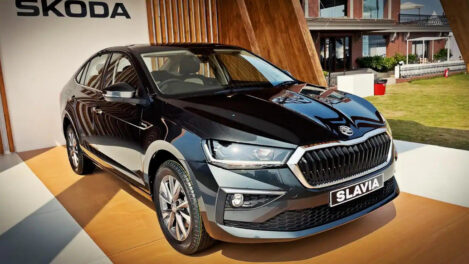 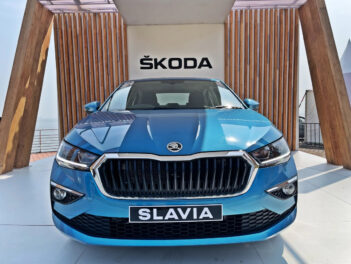