Javed Afridi has once again teased the MG3 hatchback on his Twitter handle with 2.1 million followers. Sharing a yellow colored example of the hatchback along with a message “Pakistan Are You Ready? #MG3.” The key figure behind MG cars in Pakistan has yet again hinted the arrival of MG’s cheapest product in the lineup.

Pakistan are you ready ❓#MG3 pic.twitter.com/YgEbv7SiOE

But nobody knows for sure, perhaps even Javed Afridi himself as to when the MG3 hatchback will formally make its way in Pakistan. Afridi first teased the MG3 back in February 2021 with a caption: “Less than 2.0 million!?” The message went viral on the internet mainly due to a catchy price tag Afridi mentioned. However even with Dollar going sky high against Pak Rupee since the beginning of this year, he reaffirmed in June 2022 that MG3 will be priced below Rs 2.0 million.

So far during the last 21 months, Javed Afridi has teased the MG3 hatchback for at least 6 times. Sometimes sharing images, or videos or even posing himself with the car. However now the tweets have become more as meme templates rather than people taking them seriously. MG is yet to begin mass production (CKD assembling) of the HS crossover which is so far its bestselling product in Pakistan, but comes as a CBU import till now. 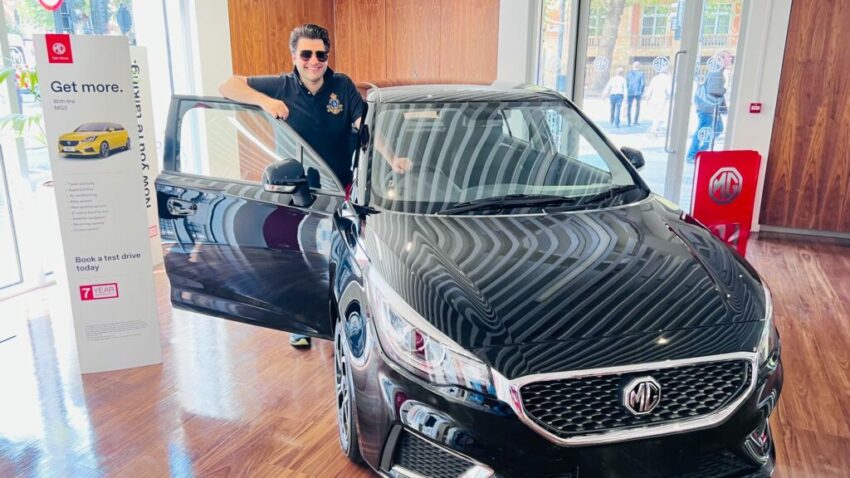 Earlier this year, MG Pakistan again reaffirmed its commitments to launch 3 CKD models in the country. These will include the MG HS crossover, MG5 (MG GT) sedan while the company didn’t mentioned the name of the third model it intends to launch and gave no information on the pricing either. Interestingly however, Javed Afridi in his earlier tweet in March 2022 mentioned MG3 hatchback and Gloster SUV alongside MG GT as upcoming new models.

But with recent restrictions imposed by the government on the import of CKD kits, even the established players with decades of presence in the country are finding it hard to assemble vehicle due to depleting inventory. In these circumstances, whether MG will be able to kick-off its CKD operations and launch new models in the country will sure be an interesting thing to see.

Whether we’ll see the formal launch of MG3 before the end of this year or will witness yet another tweet by Javed Afridi asking us whether we are ready for the MG3 hatchback or not. However on behalf of every Pakistani, we would like to say “Yes Javed bhai yes… we are ready!”