Various New MG Cars on Display in These Cities

Javed Afridi is back in action once again, this time tweeting about the new MG cars being put on display in various cities across the country. According to his latest tweet, the MG GT (MG5) will be at MG Sialkot, the RX8 will be at MG Center Karachi and the MG6 as previously reported, is put on display at MG Lyallpur Motors.

While the image reads “have you seen the next MG in your town?” Javed Afridi captions the tweet with text ‘MG3’ along with confused face emojis and a question mark, indicating perhaps there is no chance for us to witness the hatchback in near future. MG3 created a lot of buzz among the auto consumers of Pakistan due to Javed Afridi’s less than PKR 2.0 million tweet about the hatchback earlier this year. Later he also created a hype with a ‘Coming Soon’ message for the MG3.

Coming back to the topic, the MG6 is already on display at MG Lyallpur Motors. Its a compact sporty sedan that is powered by 1.5 liter turbocharged engine good for 181hp of power and 285 Nm of peak torque, and is equipped with a 7-speed dual-clutch gearbox. The MG RX8 which is at MG Center Karachi is a 7-seat mid-sized SUV that competes against the likes of Toyota Fortuner. Lastly, the MG GT which can be seen at MG Sialkot is another compact sporty sedan which has a 1.5L engine under its hood.

SAIC, the parent company of MG Motors has indicated to ramp up production in Pakistan by tapping every possible vehicle segment, however the company despite claiming to have completed the plant is yet to begin commercial production at its assembling facility. Though the first local assembled MG HS had rolled off the assembly lines in May 2021. 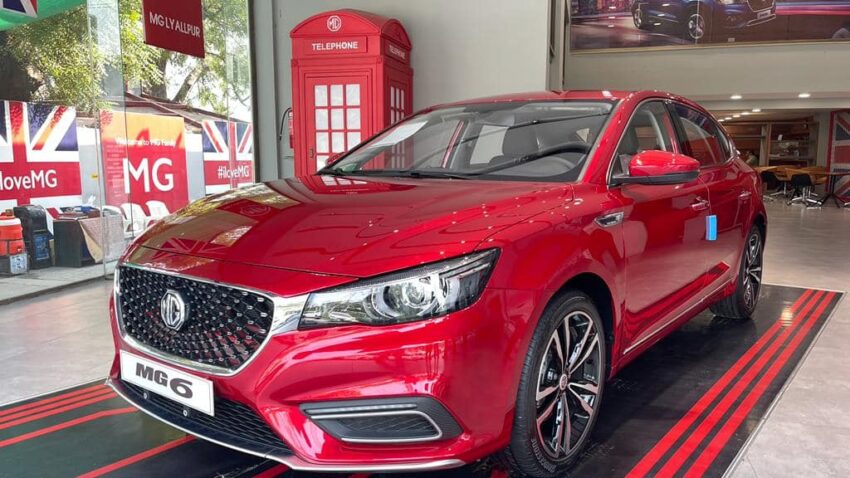 All the displayed units are CBU imports and Left Hand Drive models, so the company is basically gauging public interest by putting these vehicles on display. It is yet to be known when the formal launch of these cars will take place, and whether they will be available as CKD assembled models or will continue to come as CBU.